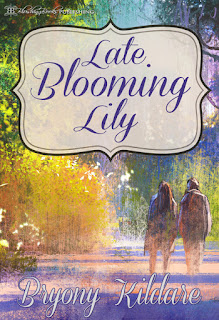 Forty-three and divorced, Lily Amis has put all her time and energy into building her business as a graphic designer. When her elderly aunt dies, leaving Lily responsible for cleaning out and selling her rural Montana home, it's just a hitch in Lily's well-organized life. She'll be out of Montana in two months. Tops.

That's what she thinks, anyway, until she meets Rob—the rancher next door. Rob tempts Lily on every level. His casual authority reawakens long buried dreams and desires, and when she discovers he finds the girlish submission in her heart every bit as exciting as she does, the banked fires of her sexuality reawaken to a roaring heat. Although she revels in the strict care and loving tenderness that he offers her, waking up to life forces Lily to face everything she's left behind. When a fit of artistic inspiration causes Lily to defy both Rob and the orders of her new physician, kind but strict Dr. Barton, Lily has quite a reckoning to face. Can Rob and Lily's new love survive the pain that she has suppressed for so long?
Purchase now from: Amazon, Barnes and Noble, or Blushing Books!

Excerpt
“Rob, please.” Her voice came out higher, weaker than she meant. “I'm sorry, I know I made you think I would...that I could...” Her eyes were closed now, stinging at the pressure of salt tears behind them.
His other hand came up to her face again, and his fingers slipped under her chin, forcing her head up. “Open your eyes, Lily. Look at me.”
It wasn't easy to obey. Even thus, shutting him out with every means at her disposal, she could smell his soap, the warm, fresh man scent of him, feel every centimeter of skin that touched his. Even without looking, he was too much. But she couldn't pull away—couldn't force herself to disobey. Finally, she opened her eyes, looking up at him, letting him see the tearful panic that held her fast. His own face was calm, inscrutable almost. Yet there was a strange tenderness to it that softened the overwhelmed feeling that scratched and tore within her. There was something safe there, some place of refuge in that gentleness. She waited, terrified yet strangely hopeful, for him to speak.
“Go and get your pencils,” he repeated, then released her and walked out of the kitchen and into the little sitting room.
Numbly, Lily went out onto the front porch, where she'd left her sketching supplies after some work that morning. Standing out there, in the cool night air, she paused for just a moment to breathe. Why was he so insistent? He had no right to order her about, and yet...and yet each tiny obedience brought a strange, unsettling thrill to it. She didn't have to go back into the house. She could stay out here. Hell, she could grab her keys off the hall table and just drive away from this place until she sorted out what was going on in her unhappy heart.
But instead she picked up her sketchpad and the little pouch of charcoals and pencils that always accompanied it, and went into the sitting room. He was sitting in an arm chair, and Lily was relieved, because if she'd had to face the prospect of sitting next to him on the couch, she wasn't sure she wouldn't have run after all. Instead, she sat down on an ottoman a little distance away. “I'm not sure it'll be anything worth looking at,” she said, very softly. “I—shouldn't have let myself get so worked up.”
He didn't answer, and Lily sharpened a pencil carefully, then slipped off her shoes, pulling her feet up under her as she turned to a fresh page in her sketchpad. The little rituals—the smell of the freshly-cut pencil, the posture of concentration, all of it—helped calm her more, letting the confident Lily who knew her business take over in some measure from the frightened, confused Lily. She didn't try to even look at his face yet, sensed it might spoil what he was trying to give her. Instead, she focused again on his hands, beginning first with quick sketches to judge the angles and shapes, then turning the page for a more detailed, careful approach.
Rob was silent, and Lily knew he was waiting for her to speak. At last she said, “I'm not frigid.” It came out hard and defensive, and it wasn't quite what she wanted to say, but it came out all the same. “But...I can't...I won't like it,” she said miserably. “And I would hate, you see, I would hate not to like it with you because...” A long pause, a hard swallow. “I like you.”
There was a long pause while Rob turned over her words, and then he said, “Does it hurt you? Have you seen a doctor?”
Lily shook her head vigorously. “It's not—it's not like that. Everything works fine, but...I just can't like it. When I'm alone, I can relax and just feel good, but even with Brian, I never enjoyed it, not after the first little bit when I was so young and horny and crazy. It's...it's like looking out a window at people in the sunshine. You can see it on their faces and how warm and lovely it is, but...you can't feel it. You...I meant what I said. You're so beautiful. And I want...but I can't. I just can't.” Lily let the miserable, helpless refusal fall between them, laying her inadequacy, her worthlessness bare before him. Her pencil kept moving. Once the lines were laid out, she worked to add contour and shading, to try and do justice to the flesh that had so seduced her gaze even as she obstinately rejected the claim it had laid on her.
“Tell me a story,” he said, very unexpectedly.
That was surprising enough to make her look up, and it was easier this time, now that she was calmer. The strange gentleness was still there, and Lily clung to it, even though she hadn't deserved it and never would. “I don't understand,” she whispered. “What kind of story?”
“Tell me a story you like. Tell me the story you tell yourself in bed when you touch yourself. Tell me the one that you never told anyone.”